That could be the title of the real story of Zulily, the clothing e-commerce startup.

Startup founders can learn some critical lessons from what happened to the great plans of the company's co-founders.

I’ll quote (in italics) from the excellent reporting in Heard on the Street by Miriam Gottfried of the Wall Street Journal, 2015 August 18.

“Zulily’s initial strategy of selling clothing from lesser-known brands offered some promise of differentiation. Amazon also sells clothing but its interface caters more to shoppers who know exactly what they are looking for, rather than those interested in browsing unfamiliar labels.

And Zulily’s strategy initially appealed to investors because it held no inventory, with items being shipped directly to buyers from vendors after they were purchased. Moreover, the company didn’t accept returns, further simplifying its supply chain and allowing it to sell at deeper discounts.”

Ouch! Sales came in less than expected, began to sag. Now what would you do as the CEO? Take a guess -- and then read on. 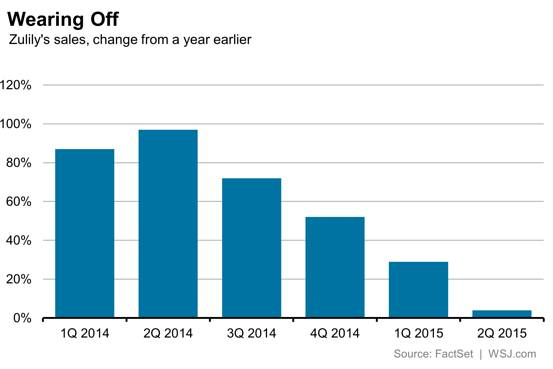 Here is what happened:

“But in its eagerness to keep growing, Zulily began to add more established brands. This led to greater churn as shoppers looking for big labels could easily buy them elsewhere, including on Amazon. When Zulily acknowledged as much and reported higher expenses in its fourth-quarter earnings report back in February, its stock fell 27% in a single day.

Meanwhile, the company’s supply chain and returns policy proved limiting when it came to retaining loyal customers. Shoppers accustomed to fast shipping from Amazon weren’t keen on the 10-plus days on average it took an item to leave Zulily’s warehouses.

The company said in March it was shifting to a model of stocking up inventory, though vendors would continue to actually own it. In June, it said it was testing an online returns program. Neither of those changes were enough to turnaround its second-quarter results.”

So did you decide to do what the CEO did? What would have been a better move?

BOTTOM LINE: Even the best of startup ideas has flaws that can hit the wall and crash. As the company grows with excitement, expect dark days to challenge your best plans. When your unfair advantage is clear and strong, yet your best efforts result in sales dropping rapidly, it’s time to pivot (move radically). That’s tough to accept ("It's giving up!"). And hard for even a serial entrepreneur to execute flawlessly. Yet that’s what is expected of founder CEOs. If you think you can do that, then you are ready to do a real startup.

P.S. It will be interesting to watch how Jet.com does. To be continued . . .

CUSTOMER SERVICE: Make it stand out

As I finished reading the business plan, I realized how much stronger the competitive advantage could be if it included a powerful post-sale customer service plan. That is a weakness in most plans I read. It seems like an afterthought, one of those dull areas to address after you get the company started. But with a bit of forethought, you can make your plan stand out, get the money and the top employees.

Start by thinking about how you would feel if you bought your product or service and found no one to contact about troubles, questions and hindrances using what you bought. Then plan how to work on your customer service so it will be world-class. That helps you sort out the special issues customers are likely to encounter. Plan, in detail, how you will resolve those issues: who, when, how and so on. It's simple yet so easy. And it adds power to your bplan.

BOTTOM LINE: To stand out competitively, use customer service to (1) improve the effectiveness of the design of your product or service and (2) to differentiate yourself from me-too competition. That is one way to boost your unfair advantage. Most companies don't.