MANAGING A STARTUP (3): Uncertainty and Wealth of a startup contrasted with a large corporation

Compare managing in a startup to that in a large corporation to boost your chances of launching a successful startup.

Let's look at the twins, Uncertainty and Wealth. Then we'll examine the so-what for you the startup leader.

Startups are very risky, very likely to close the doors in a few short years. They have lottery odds of getting to a successful initial public offering. They must grow at nearly explosive rates of expansion in order to reach a much higher level where the risk is much lower. 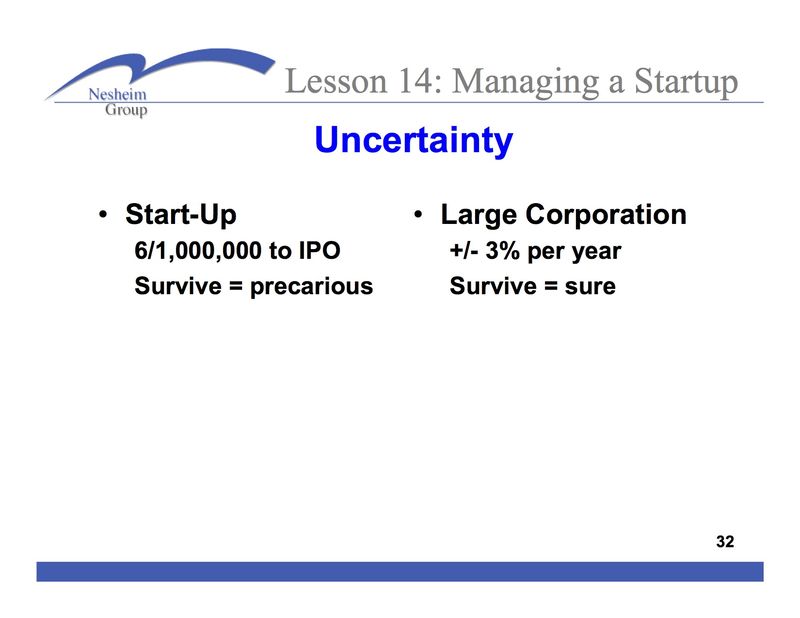 With the startup's high risk comes the potential for huge financial wealth as a personal reward. The dollar amount is so high that it is staggering to comprehend. In less than a decade, a founder CEO can become a billionaire and the first twenty employees very rich.

Large corporations grow very slowly. The executives make a lot of money by incrementally increasing the size of an already huge business. Employees have to climb a ladder to a very narrow top. Along the way, most make most of their money via wages and cash bonuses. Few ambitious employees achieve rank of the top executives. Most settle for earning less than a million dollars a year, typically in the hundreds of thousands of dollars as a middle level manager, perhaps of a large group of people responsible for a family of products. 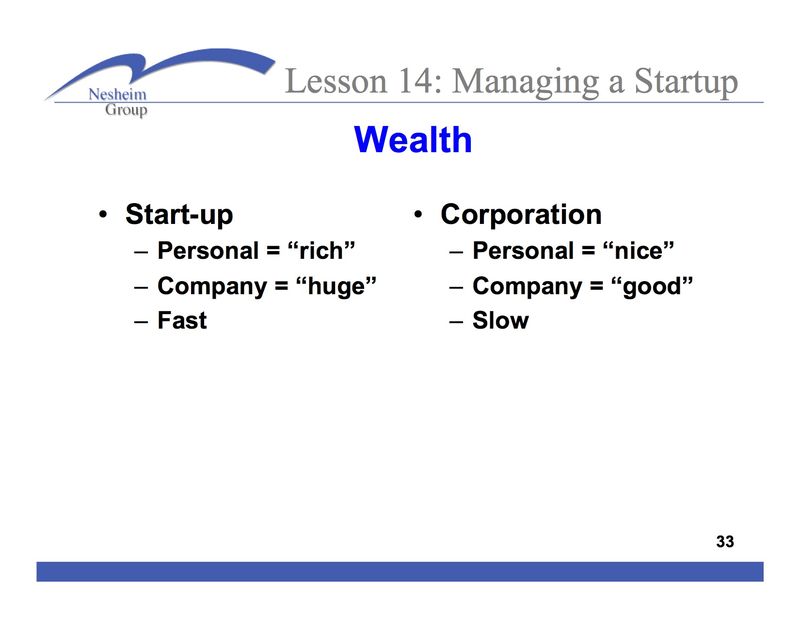 Because of the staggeringly high risks and immense demands for rocket propelled growth, serial entrepreneurs have learned to be very careful who they hire. Accordingly, here are some of the things they look for in potential employees for their startups:

It is not easy to switch from thinking like a large corporate person and into the mind-set of the startup entrepreneur. But it is required. Central to that change is an understanding of the twins Uncertainty and Wealth. People seem to fall naturally into one of two pools of talent. One is right for startups. It's your job to find then and leave the others working at the large corporations where they will do fine work. Learning to recruit the breed of person for a successful startup is what serial entrepreneurs do best. It is central to how they build great startups and construct unfair competitive advantages.

Posted at 10:49 AM in Finance & Money, Leadership, Managing | Permalink

This is only a preview. Your comment has not yet been posted.

The letters and numbers you entered did not match the image. Please try again.

As a final step before posting your comment, enter the letters and numbers you see in the image below. This prevents automated programs from posting comments.

Having trouble reading this image? View an alternate.

Comments are moderated, and will not appear until the author has approved them.

(Name is required. Email address will not be displayed with the comment.)