5 TIPS FROM GORILLAS FOR STARTUPS: What IPO-bound enterprises teach entrepreneurs

QUESTION: What do these companies have in common?

ANSWER: They are all Gorillas of their space. They dominate a new market. They own a category. They are Number One in their segment. Some are already public IPOed enterprises, the others will be soon enough. All of them have wonderful lessons for you, the budding entrepreneur.

When you combine those 5 Tips from Gorillas, you will have the ingredients to aggressively power off the starting line and get your new enterprise into The Race: to become The Gorilla of the new category, the new space, the new market. Meanwhile several of your competitors will be persistently attacking the ever stronger Gorilla with the pool of blood around them growing. You will not be in the red pool. Instead you might even get a few grudgingly complementary remarks from The Gorilla about your and your clever new enterprise.

MAIN POINT: The Prime Objective for your startup is to become The Gorilla of a new category. Watching how other startups get to IPO status reveals what you have to also do.

The Gorilla's go IPO before the rest of the pack who are struggling to survive, let alone catch up. Number One owns at least 30 percent share of the new market. One or two remaining startups will have a chance to become The Chimpanzees. The rest are doomed to remain among the many starving monkeys. You want to aim to become The Gorilla.

BOTTOM LINE: The Prime Objective of the smart entrepreneur (e.g. serial entrepreneurs) is to find an uncontested new market to dominate so the startup can become The Gorilla of a new category. You can learn about that by studying the track records of recent Gorillas who have or will so be IPO public corporations. They have figured out what the startup game is all about. So can you. When you do, you'll be on your way to building the unfair advantage that powers you to become The Gorilla of the new space.

INSIDE ZYNGA'S BUSINESS MODEL: Lesson = learn how your biz model works and work with reality instead of dreams

When you examine the IPO prospectus of Zynga (S-1) and dig into the numbers you can discover how their cash flow works, where their profit comes from. That is what a "business model" is all about.

Your objective should be to build a startup business plan that is not based on dreams ("Forget them, worthless bplan," says the VC), rather it is founded on fact-based reality (workable, financeable and exciting). That's your lesson for today. A realistic bplan is built on a realistic business model. That attracts the best people, money and end users, and then customers run to make money with you.

A quick summary of the inside secrets of how the Zynga business model works was done by Douglas MacMillan and Brand Stone of Bloomberg Business Week. It reveals that less than 1 percent of Zynga's game players produce a quarter and half of its revenue ($ paid for virtual game items). Las Vegas refers to them as "whales." So does Zynga.

Knowing such realistic facts separates the dreamers from the realists. The latter get the money and get going.

Your business plan must be built on the realism of the industry you are marketing to. When you do that, the VCs and potential employees will be very confident of the future of your new enterprise.

BOTTOM LINE: Build the engine of your new enterprise to be as realistic a business model as you can. Avoid dreams and guesses. Declare your future with confidence based on facts. Show your income statement with assurance that it is driven by your realistic business model. When you use realism to build your business model, you'll have the foundation to on which to construct an unfair competitive advantage.

WHAT WERE ZYNGA'S VENTURE ROUNDS BEFORE IPO? Know the VC pricing curve and use it to plan your rounds of startup capital

In its pre-IPO prospectus data, startup Zynga has revealed its rounds of venture financing.

I dug through the think S-1 document filed with the Securities Exchange Commission and have created a handy chart for you to work with. (More data will be added by Zynga as the IPO date arrives).

You can use my analysis to plan your own rounds of financing.

Here is the chart: 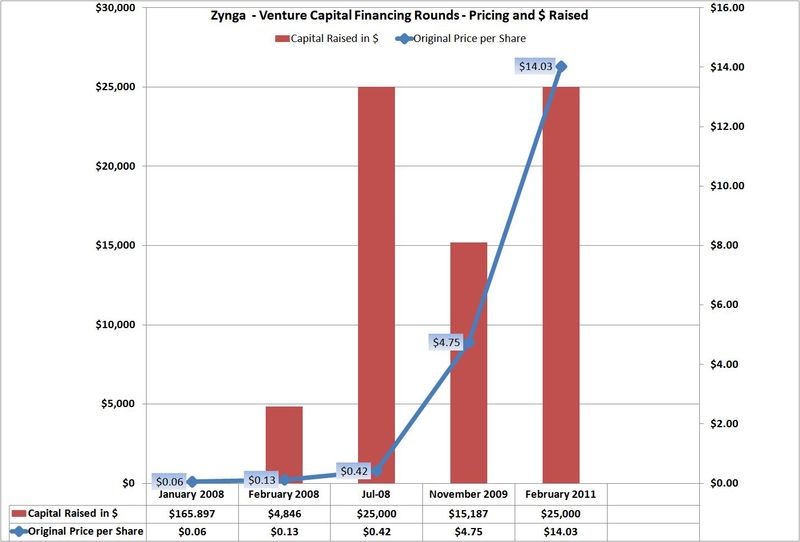 This startup did its A Round in two parts: first an A round and then an A-1 round (both early in 2008). That gave the first "seed" investors the lowest price per share and quickly (a month later) established a paper return on their investment of 100% (X2).

This financial engineering was again done for the B and B-1 series in July 2008 and November 2009. There the time separation was seventeen months. And the markup in price per share was over ten times!

Note the markup between February 2008 (A-1) and July 2008 (B) was around three times in five months. Less of an ROI than the subsequent round, yet a handsome return nonetheless.

A fundamental lesson here is that when the founders have momentum and boom psychology on their side, the company can mark up its shares aggressively and still raise a lot of capital. That's your prime objective: to use the first precious capital to start the fire in the boiler, build pressure and start the internal engine rolling. Capture the attention of end users and customers, begin initial revenue and show a confident path to profitability, on as large a scale as possible. That builds true value, increases the worth of the startup and attracts the top talent and investors you need to execute your plan.

BOTTOM LINE: Use real startup data to learn how to price rounds of venture capital. That is fundamental to the skill set of the winning entrepreneur. Examine Zynga's VC history and plot a chart for your own startup. Serial entrepreneurs do it, they know it is key to building a solid unfair advantage.

As the IPO date for Zynga arrives, I'll give you more insight to the private rounds and valuations of this fascinating new venture.

I wish you The Best on your Advenure!